The Italianate buildings at 1209 and 1211 Gadsden Street were originally constructed in 1920 and served various commercial and industrial tenants throughout the 20th and 21st century. A rare example of Italianate architecture in the capitol city, these two buildings contribute to the historic significance of Columbia’s West Gervais Street Historic District. The buildings’ alternate use as a grocer and warehouse building, as the production source for soft drink bottle caps distributed throughout the state, and as an auto parts distributor speak to the changing nature of commerce in the West Gervais Historic District throughout the 20th century. The history below was compiled through research in Columbia’s historic city directories in the collection of the South Carolina Digital Library, Sanborn Fire Insurance maps of the city, historic newspaper articles, historic images on file in Richland County Public Library’s Walker Local and Family History Center, and interviews with previous building owners.

The buildings at 1209 and 1211 Gadsden Street first appear in the historic record in 1920. The site was occupied by a large, single-story brick cotton warehouse and a shallow two-story brick building as late as 1919, when the Sanborn Fire Insurance Company made its map of Columbia. The two-story buildings that now occupy the site were constructed in the spring of 1920. Gaines Fellers occupied the southern half – known as 1209 Gadsden – and began advertising sale of the northern half in The State newspaper May 8, 1920. Therein, the building was described as “a dandy brand new brick and stucco building” with a “large deep cement cellar under the entire building” and boasting a “new electric elevator.”

Gaines Fellers’ merchandise sustained significant damage in late December 1921 when a fire started in the second story of the building. The fire burned old crates, toilet paper, and other articles stored on the floor, causing about $17,500 worth of damage to the stock. Contemporary commentators did not note any damage to the building itself.

Various grocer and warehouse tenants moved in and out of 1209 throughout the 1920s, but by 1929 both 1209 and the adjacent 1211 Gadsden Street had gained long-term tenants. WC Peeler Company, a bottling and fountain drink supply company, occupied 1209 Gadsden Street from 1927 to 1968. WC Peeler was the South Carolina state representative of the Crown Cork and Seal Company, a Baltimore-based soft drink bottle crown manufacturer. His company won the state contract to furnish soft drink bottle crowns for bottlers throughout the state when South Carolina restructured its soft drink tax in 1928. According to contemporary newspapers, the new process affected only soft drink bottlers, who were “required by statute to either purchase the tax paid crowns or to affix paper tax stamps to each bottle offered for sale.” The SC state tax commission ordered crowns in carload lots, reducing the cost to bottlers. Young & Roberts Inc, a grocer, operated next door at 1211 Gadsden Street from 1929 to 1969.

JW Vaughan Co, an industrial distributor serving South Carolina’s Piedmont area since the 1920s, purchased 1209 Gadsden Street in 1968. At that time, 1209 and 1211 Gadsden were painted different colors. The JW Vaughan Co made significant improvements to the interior of the second level of 1209 in the early 1980s, upfitting its space to accommodate offices for its staff. Additional improvements to the first level created one office and separated the garage space from storage space at the rear of the building. An interior staircase along the northern interior wall was removed. A new staircase was added along the southern wall to provide access to the second level of the building. Renovations to the building also included adding a layer of stucco to the first level of the facades of both 1209 and 1211. The entire façade of both buildings was painted. Photographs of the building before and after these alterations confirm they did not destroy the buildings’ existing apertures, but merely encased them. Door and window arches were retained and reflected in the new façade coverings.

In November 1989, a fire started in the basement of 1211 Gadsden Street. At that time, the basement of 1211 housed a residential apartment, and the ground and second floors housed offices. Several areas of the roof and floors had to be replaced to ensure the building’s structural integrity. JW Vaughan in the unaffected 1209 Gadsden Street saw an opportunity to gain much needed space for office and warehousing and purchased the adjoining 1211 before the end of the year.

Barry W. Clark purchased JW Vaughan and its buildings at 1209 & 1211 Gadsden Street in 2000 and changed the name of the company to BW Clark. The new building owners repainted the buildings’ facade to accommodate the change in the company’s name but left the existing stucco façade intact. BW Clark continued to operate in the building until 2019 when it relocated outside of downtown. The buildings’ new owners began planning for its adaptive reuse as soon as the sale was complete. Using federal, state, and local historic tax credits (HTCs), the rehabilitation project will preserve the building’s historic features while adapting it for new, residential use. 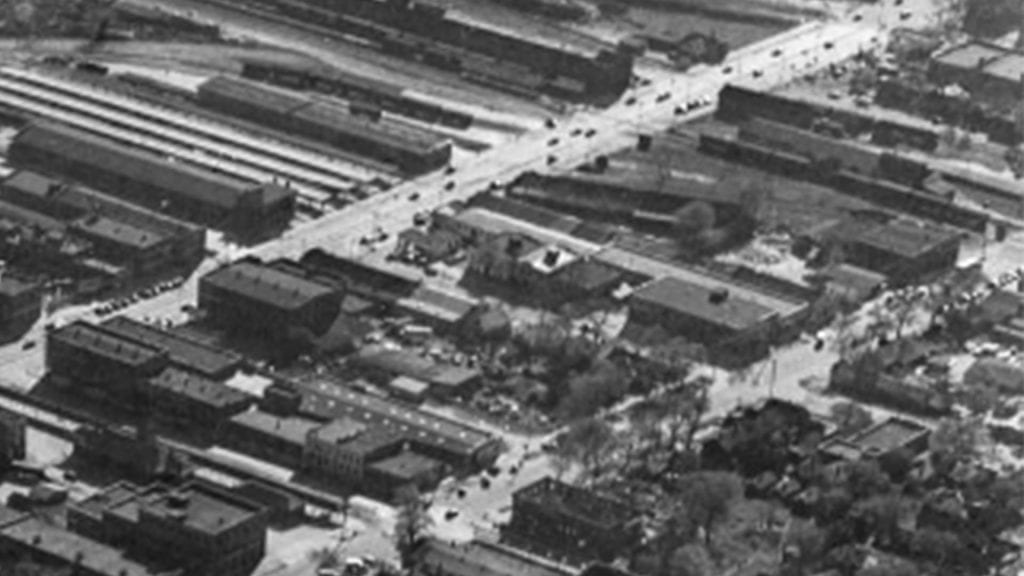 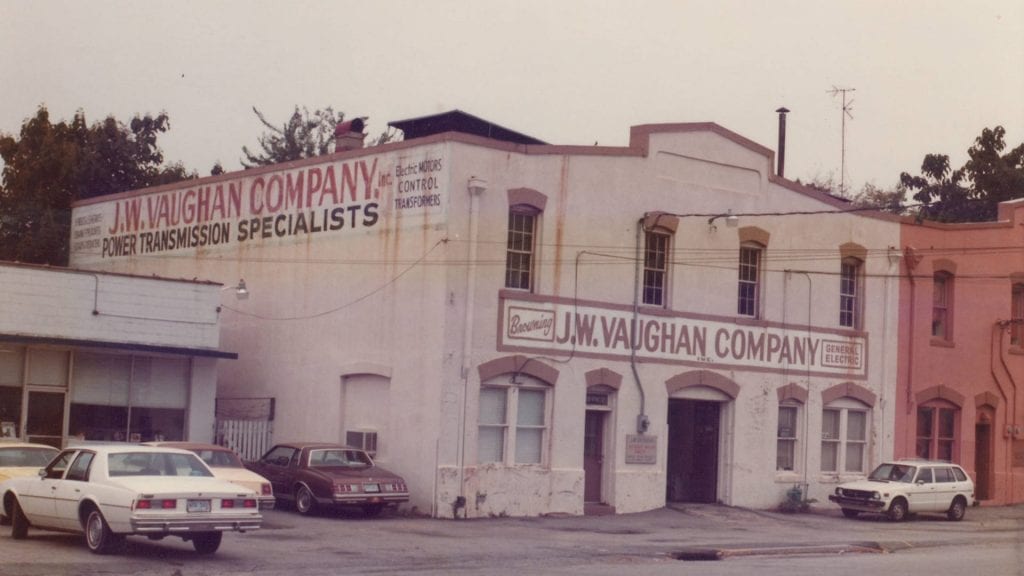 This 1984 photograph of 1209 and 1211 Gadsden Street was taken before JW Vaughan Company expanded into both buildings. Image provided by the Clark family. 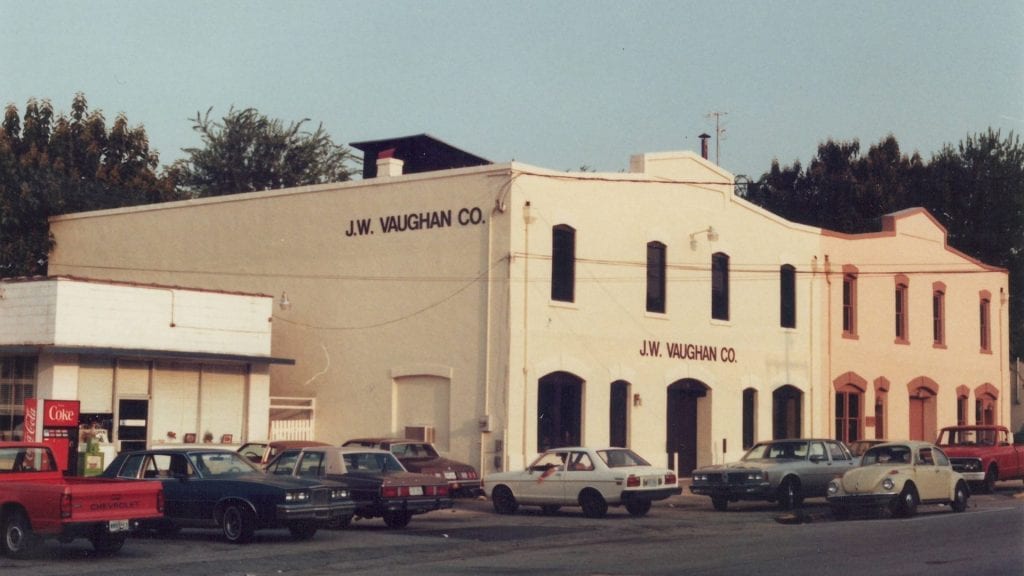 This 1984 photograph shows the façade improvements made to both buildings. Image provided by the Clark family.